As a teenager I made most of my own clothes, from tops to trousers, skirts to jackets, even hats! Yes, ready to wear was more expensive back then, but mainly because I loathed the idea of arriving somewhere wearing the same outfit as someone else, oooh the shame! I wanted my clothes to be individual and the only way to ensure that is to buy couture $$$.........or make it yourself :-).

And then, as so often happens, university, work, family all encroached on my hobby time and sewing became a long forgotten art to me. I occasionally dragged out the machine to patch, alter, make-do and mend but that's not inspiring, it's a chore urgh!

Earlier this year my creative side awoke from its dormant state and my love of sewing was renewed. I'm ashamed to say I seem to have forgotten quite a few of my skills and I'm very rusty, but I'm back in the saddle and here are my first couple of projects. Not exactly clothes, but it's a start.

My first creation started life as a pair of socks


And became a Sock Monkey (many thanks to all the help I received from the MSE crew!). 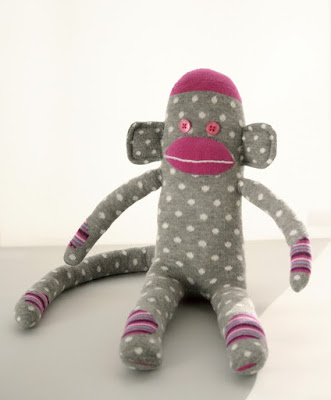 My niece was very happy to give her a home.
Another quickly followed, complete with accessories, My daughter claimed this one.

So much more enjoyable creating a cute little critter than mending a torn seam. Don'tcha just love sock monkeys? or Socken Monken as they have become known in my house.....
Labels: craft sewing sock monkeys