Just a quick video diary update on my Six Month Smile braces journey. If you remember from my last update I accidentally swallowed a metal brace bracket! Well panic over, I visited the orthodontist for a temporary repair the following day, and had my usual appointment 3 days later where the bracket was replaced. Fingers crossed the drama is over, let's just say the rogue bracket must have made it's way through even though I didn't notice it LOL!

In addition, my dentist changed my upper brace wire for a thicker one to get things moving. My lower teeth have seen some really good progress, but my upper teeth are being a little lazy, probably because of that damn bridge.

But I also spoke to my dentist about an issue that's been bothering me.

My teeth have gone really yellow!


Since having the braces installed, within the space of 48 hours my teeth had discoloured to the point they now match the dreaded bridge. I didn't want to sound vain asking the dentist about something so trivial, but it's the yellowing that's bothering me more than wearing the braces. I don't mind people knowing I'm wearing braces, I don't like the idea that people think I'm not cleaning my teeth.

Every article and post I read on the subject pointed to a gradual discolouring from food and drink. But my teeth went yellow very quickly, within 2 days or so of having the braces installed. And at that point I was still struggling to eat anything, living on a diet of  mashed potato and porridge. I've been quite obsessive about avoiding staining foods, and cleaning my teeth after every meal, so I doubt that's the cause.

I also have a friend who's been wearing braces for just over a year and she's had the same issue, she was told it was the fluoride used to prepare the teeth. My own dentist said it's residual adhesive from gluing the brackets to the tooth surface. And that makes sense as my teeth feel slightly rougher than normal.

Unfortunately there's not much that can be done for it until the brackets are removed, then it can be buffed away. So unless anyone knows differently I'm stuck with the yellow teeth...for now. I suspect most people I speak to don't even notice it, in fact most haven't even noticed I'm wearing braces LOL!


I'd love guys to watch my latest vlog instalment and let me know what you think, or if you have any questions then ask away and I'll do my very best to answer them! x 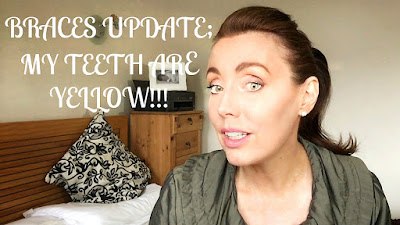